The Chair intends to unravel the inspiring life of K.R Narayanan, the former president of India, from 25.07.1997 to 25.07.2002. His works and orations as a well-known academic, teacher, diplomat and statesman inspired not only India’s political sphere but also received international acclaim. He staunchly upheld the secular values of equality, liberty and fraternity promised by the Constitution of India and raised his voice against the atrocities against socially disadvantaged groups. He also prophesied for the life of Indian democracy for which he laid stress on the removal of caste based discrimination and the democratization of Indian society. The Chair aims to provide a well equipped centre of learning for intellectuals, academics and students to undertake studies/research to understand the life, work and thoughts of K.R. Narayanan. His contributions in the realm of international relations between India and other countries could also form a major component of this research programme. The collection and compilation of materials related to these aspects and the building up of a library to make available his ideas and writings would be one of the major objectives of the Chair. The Chair would also undertake research and higher studies in relation to the socio economic and cultural life of the marginalized groups, especially in Kerala and to build a centre for the study of social discrimination and exclusion with a view to address the contemporary developmental problems of the marginalized sections, especially dalits who live in colonies. Constructing dalit human development index for Kerala via extensive surveying of people across dalit colonies and outside will also form an important activity of the chair.

Centre for the Study of Regional Development

KR NARAYANAN CHAIR WILL BE HOSTED IN THE SCHOOL OF SOCIAL SCIENCES, MAHATMA GANDHI UNIVERSITY (hereafter, the School or SSS) was established in 1989 with the objective of advancing teaching and research in interdisciplinary social sciences by creating an altogether fresh space of scholarly conversation. SSS currently offers, besides a Ph D Programme in varied branches of Social Sciences, three M Phil Programmes (in Social Sciences, Social Transformation and Empowerment, and Human Ecology and Natural History) and two MA Programmes (in Anthropology and History). We especially cater to the higher educational needs of socially and economically disadvantaged students, mostly of rural origin, who form the major share of SSS student-population. SSS is currently on the way to creating an Equal Access Academic Environment addressing the requirements of persons with disabilities.

SSS faculty includes historians, philosophers, political economists, and social anthropologists. Besides undertaking teaching, research, and publishing, SSS faculty are active in nature conservation and archaeological field-excavation. SSS has facilitated the rise of a generation of brilliant, young scholars who are now associated with some of the best centres of social science learning within and outside the country. The Library has to its credit one of the best collections in Social Sciences in South India. The Archaeological Museum, even if in the making, is already rated high in terms of collection and display. SSS working paper series, Lateral Studies, has made a mark in scholarly literature. The Department of Forests and Wildlife, Government of Kerala has regularly engaged SSS as evaluators of community participation in forest management. Besides, SSS has found special mention in international journals and in the status of research survey conducted by the New York-based Council for Social Science Research.

The role of Dalits in cementing the fabric of Indian democracy and secularism has been well recognised by political parties and social scientists. The notion that the Dalits and minorities who were the subjects of power in the hands of the upper castes (Savarna) groups were radically altered as a part of the democratization processes that has taking place in India. Both these groups has been/are actively participated in election processes and articulate their rights and identity. This is been done variously in various parts of India, considering the local or regional specificities of the political situations. Here politics is not separated from caste or religion. Certain political developments in relation to caste, and religion created a climate in Indian society to form an identity consciousness which became slowly active. Some identify this development as communal with a negative tone. But it has defined or viewed by the followers of identity politics are thus: ‘communal’ as ‘a group who feel otherwise alienated in the dominant mainstream society wanted to organize themselves to protect their identity as being a Dalit or Muslim/Christian/Sikh etc’. There is a historical reason coupled with an ideological assertion to the realization of identity politics. Serious scholars who analyses contemporary political situations in India and its interrelationship with caste, and religion would certainly rise questions such as under what socio-political conditions that these sorts of identity questions have emerged in public domain? What are its historical causes? And How it venerates in the contemporary. Besides the active role of the socio-religious and reform movements of nineteenth century, its ethos of creating an egalitarian society, accepting the other voices of the people, and understanding their ‘social being’ has been met with a fag end. Social movements of the Dalits for articulating their human rights were brutally attacked and pushed them into silence. The land question is unsettled, exploitation, harassment and insult etc., as caste taboos still an order of our society, which reflect not only in the ordinary life of the people but also permeates in the modern institutions such as schools, colleges and the Universities. How subtly caste work in our society?How far Dalit politics could improve our democracy or how far democracy could be so inclusive are the larger questions we intend to discuss in this component. 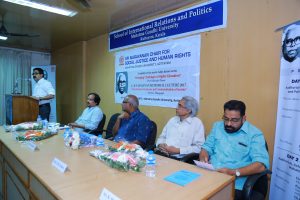 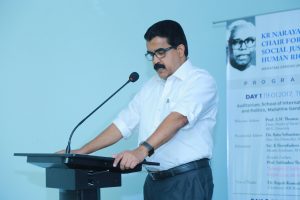