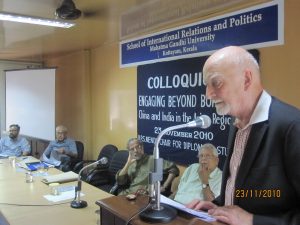 While the West Asia/Gulf region has become of critical importance to China’s economic interests, its involvement in the region is not likely to be conflictual with the interests of other powers – whether Western or Asian – in the short- or medium-term, according to

Prof. Tim Nimblock ,Emeritus Professor, Institute of Arab and Islamic studies University of Exeter, UK who is the honorary professor at the KPS Menon Chair.  Prof. Tim was delivering the keynote address at the Colloquium on “Engaging beyond Borders: China and India in the Asian Regions” organised by the K.P.S. Menon Chair for Diplomatic Studies, School of International Relations and Politics (SIRP), Mahatma Gandhi University.

Prof. Tim said that the strengthened role of China in West Asia is closely linked to  avoiding conflictual issues, emphasising political non-interference and non-involvement, using its diplomatic skill in maintaining friendly relations with all of the three major powers of the Gulf, projecting its policies as less self-interested than those pursued by Western powers, stressing mutual dependence as a basis for the Gulf-China relationship (and eschewing practices suggestive of a patron-client or dominant power relationship), and retaining a reasonable level of credibility (through avoiding commitments of doubtful practicality or feasibility). If China were to move to a more conflictual approach, whether towards regional states or to others active in the region, it would lose the substantial and substantive advantages which it has at present. For the foreseeable future, therefore, a more assertive strategic role is unlikely. Many of the positive aspects of China’s role in the Gulf are – or could be – shared with India’s present and prospective role in the region. In this respect China’s and India’s roles, despite no doubt being strongly competitive, need not be conflictual. Both states have a common interest in operating in a manner respectful of each other’s interests. This is, also, in the interests of the Gulf states themselves, which have suffered from (and are still suffering the effects of) external powers pursuing conflictual objectives in the region. The most useful way for Chinaand India to envisage their roles in the region relative to each other, therefore, is as competitors whose roles are nonetheless potentially complementary and thus beneficial to the Gulf states, Prof Tim said. He concluded that China and India have both have a key interest in ensuring that they have secure access to Gulf oil, and in practice they can only attain this objective through a balanced framework which serves the interests of both – and of other powers also. The best way in which the two countries can enhance their own political roles, and bring about the “balanced framework” outcome, is by using their diplomatic influence and soft power to resolve intra-Gulf rivalries. As indicated above, it is these regional conflicts which have frozen the current security framework in place. In the light of the factors conditioning their roles in the region(as outlined above), India and China may be in a better position than Western powers to pursue negotiated settlements and help the Gulf states fashion workable regional institutions. India and China will be no doubt be competing for regional influence and economic gain, but their long-term interests in the Gulf can be complementary.

Speaking on China’s South Asia policy, R. Swaminathan, Chairman, International Institute for Strategic and Safety Management, “South Asia is strategically important both to India and China and both need a peaceful environment for their development. While they continue to court and help these countries, they can and should ensure that they cooperate whenever possible, compete where necessary and unavoidable, but do their best to avoid any conflict – engaging in awareness. Prof. V. Suryanarayan, Member, National Security Advisory Board & Senior Research Fellow, Centre for Asian Studies said that the policy option for India is not to embark on a policy of containment China, must find the right mix of engaging, competing and safeguarding India’s national interests. Dr.Mathew Kurian presented a paper on “India and ASEAN.Earlier, Dr. Rajan Gurukkal, Vice Chancellor, inaugurated the colloquium. He also released the first issue of the South Asian Journal of Diplomacy, published by the KPS Menon Chair. Dr. K.M.Seethi welcomed the audience. Dr. Raju Thadikkaran presided the function.

Prof. Tim Niblock will deliver a special lecture on “The Political Economy of Saudi Arabia” tomorrow at 10 AM at SIRP.